Tim Pozzi was a guest of Inntravel (01653 617002, inntravel.co.uk), which has a week’s self-guided walking on the Costa de la Luz from now until May 31, including two-centre B&B and car hire plus two dinners, from £665pp. Flights to Jerez, Seville or Malaga cost extra

A sandy cove, where waves from the cold Atlantic hurtle into the mild Mediterranean and Africa looms mightily across the water, seems as good a spot as any for a picnic in warm December sunshine. We scramble up some rocks and watch a portly, deeply tanned septuagenarian squeeze himself slowly into a wetsuit before throwing a speargun into the shallow water. He advises us to move higher up the rocks in case one of those waves drenches our feet.

“What are you fishing for?” we ask him. “Skate. Or maybe octopus. Mainly I go just for the pleasure of looking.” He smiles and wades in after his speargun before swimming off lazily and disappearing around the rocks.

We are nearing the end of our seven-night winter walking break in Andalusia, covering a modest 10 to 12km a day, and chilly, grey Britain feels far away. Having spent three nights in the perfect hilltop pueblo blanco of Vejer de la Frontera, about 50km distant, we are based just outside Tarifa — we have reached our picnic spot after a morning’s stroll along several kilometres of broad, sandy beach from the Moorish-styled Hurricane hotel. After our lunch we will take an exhilarating hike eastwards from Tarifa’s old town along an empty cliffpath above the Straits of Gibraltar. Morocco’s Rif mountains are excitingly close. Boats of all sizes are crossing between continents, as well as from sea to ocean and ocean to sea. 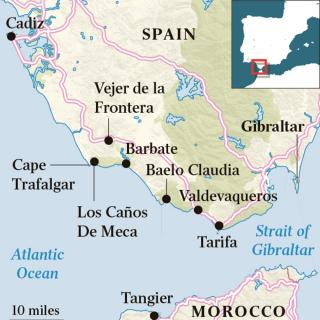 The epic, timeless nature of this corner of the world — the southernmost point of continental Europe — whose geographical features have shaped the course of human history is thrilling. One evening, with the sun going down, we stopped our hire car to check out Cape Trafalgar. A beach bar was doing a decent trade, there was a boardwalk and a lighthouse, but otherwise it seemed hard to believe that this empty, windswept spot may have afforded a distant view of Nelson’s epoch-making battle.

The small encounters we have, though, such as the one that gives us a brief insight into an old man’s Saturday afternoon, help us to better appreciate something of the spirit of Andalusia. In Vejer and Tarifa front doors are left open, beckoning you to inspect the displays of potted palms, ferns and cacti in the vestibules and courtyards within. It’s a serious business — there are prizes to be won. We were too bashful to do more than peek across the thresholds, although some do welcome visits, especially if accompanied by a small donation.

Inspections of the leafy porticoes and geranium-strewn corners offered beguiling interludes as we investigated Vejer’s narrow cobbled streets. We meandered up flights of stairs flanked with bougainvillea, passing beneath graceful brick arches and emerging into tiny jasmine-scented squares. We stepped into sandstone churches and gazed out over whitewashed walls and the tops of orange trees beneath them towards hazy plains. With fewer tourists out of season, the locals seem more relaxed. In the bakery we dithered over which pastries to buy, and before we knew it a handful of women were trying to explain to us what each contained — almond, cinnamon, orange. We left with directions, plus a hand-drawn map, to a market being held in nearby Los Caños the following morning.

After a tapas lunch — shrimp tortilla, tuna on crisp bread, artichokes topped with ham — we went for a proper walk, with boots, notes and maps. A loop through the quiet fringes of Vejer took us past windmills and gangs of watchful cats into pine woodland, with distant views of protected wetlands merging with the windy Costa de la Luz.

Even when the days are at their shortest in Andalusia, the sun still hangs in the sky until about ten past six. Throughout the clement winter, then, there is time enough to potter around in the morning or to bask in the sun with a book — even in January temperatures regularly hit the high teens — then strike out in the afternoon on one of the six walks for which we have been provided notes.

The pace is always leisurely, determined chiefly by the need to be back in time for a glass of sherry — at a rooftop café or a west-facing beach bar — with which to salute the fading of the day. Fino or manzanilla? Oloroso, amontillado or palo cortado? Over the course of seven sunsets we sampled each of them, and more. Bafflingly, the natives seem to prefer coffee at this hour. At our Vejer hotel, La Casa del Califa, there was no swimming pool, there were no fridges or televisions* in the rooms and we were obliged to park our car a few streets away. This is in part because it is an amalgam of five neighbouring houses and — the tricksiness of steering suitcases down its labyrinth of narrow staircases aside — we loved it. While the main building originated as a grain store in 1527, some of it dates back to the 10th century, including part of the romantic restaurant. The fine food here is Moroccan and, rather than dine in the palm-filled garden where we had had breakfast, we ate tagines beneath a high, barrel-vaulted ceiling of honey-coloured stone.

To start some of the walks we first had to drive, and it took us perhaps 30 minutes to reach Los Caños de Meca, a small resort that is almost deserted out of season. From here we set off along the beach, then up through sandy paths that crisscrossed through umbrella pines clinging to the rocky coastline towards Barbate, 10km away. With perfect timing, just as a torrential downpour began, we were able to flag down a bemused German tourist to drive us the final kilometre into the fishing town. At a small café we were surrounded by people directing us to the nearest taxi rank, from where a jolly cabbie ferried us back to our car.

We were loathe to leave Vejer, but the beachside location and semi-tropical gardens of the Hurricane hotel, where roses, oleander and hibiscus flourish beneath the date palms, make for a ravishing contrast. As does Tarifa. It is a magnet for kitesurfers, and with its many bars on Calle San Francisco, it is ostensibly scruffier than Vejer. Closer inspection, however, reveals a number of hip hotels amid the shops offering tattoos and shell jewellery; seek out Posada la Sacristía, Misiana Hotel and Aristoy for seriously chic ambience and decor, with La Casona making a great restaurant choice. A statue of Emperor Trajan at Baelo Claudia ALAMY

Our first walk from Tarifa took us westwards to Baelo Claudia. I’d never heard of it, but might have done had I lived 2,000 years ago when it supplied the whole of the Roman Empire with garum, the fermented fish sauce on which its armies marched. The pits in which the fish were stewed, just a couple of hundred yards from the sea, are well preserved, as is much of the rest of the town. It may not be as large or as famous as Pompeii, but the setting for Baelo Claudia, flanking a beautiful golden beach and encircled by a crescent of rocky hills, is more spectacular. And with its main street, theatre, public baths, markets and forum in decent shape, it is just as evocative.

We followed the coastline back towards the Hurricane, tracking horseshoe prints in the sand and accompanied by scurrying squads of sandpipers. We discovered Punta Paloma (Dove’s Point), a perfect dune-backed, croissant-shaped beach that we had all to ourselves. In contrast, the next strip of shoreline, Valdevaqueros, was festooned with kite-surfers, who were a dazzling sight as they fizzed across the bay beneath their multicoloured canopies.

For a change of scene we headed inland the next day to explore the red-earth tracks that meander through the tree-covered hills. The air smelt medicinal, and the sounds of cowbells, sheep, twittering birds and the occasional dog’s bark accompanied us. We were startled on two occasions, by the sound of an invisible, braying donkey and by two black pigs, truffling enthusiastically through the undergrowth.

Driving home through the dusk, we suddenly found ourselves surrounded by dimly visible, slow-moving brown shapes — a herd of shaggy cattle being guided home by a man on horseback. He was the second man on horseback we’d encountered within an hour, and it slowly dawned on us, to our surprise, that they must both be cowboys. In this corner of Andalusia, it seems, the past is very much present and alive.

*Note from La Casa del Califa - there are TV's in all rooms and fridges in Junor Suites.